When I moved to Scandinavia last year, I was immediately asked if I wanted to go to Boden by Hans Jørgen. Naturally the first response has to be 'where?'.

Boden, 100km south of the Arctic Circle was at the time, the furthest north I'd been. So I could hardly turn down the opportunity (I was swayed in my decision by the prospect of two night train journeys).

Hans Jørgen, as planner and mapper for the O-Ringen MTBO, said he would need to spend a lot of time in Boden over the coming year. Each time he went I was drawn back with him, with persuasive arguements: night trains, best breakfast, MTBO training.

Our first trip was really just checking the terrain and getting to know the area. We spent a week there with 6-10hrs mapping per day over the three terrains we would be using. Most of the areas I mapped in that first week were never used - a large sandy area (technical, but mostly unbikeable), a moto-X section (fun, but limited) and an additional area west of the Day 2, Start 1 start. Partly the reasons for not using these areas was that they were too physical with deep sand, and didn't form part of any meaningful courses. We were also regularly imposed with restrictions from O-Ringen Central: can't use this road/track due to walkers, can't use this crossing point due to bus stop, can't go here, here or here because that's the same area used for O-Ringen Foot-O. At one point I lost a lot of motivation for planning, as the restrictions meant it was impossible to get any good courses. Eventually, after much debating, we found a solution and presented it to O-R Central, which was accepted.

We made a further 2 week long trips to Boden, one in September and one in May of this year. The final trip was course checking, and racing each course to hopefully get the right winner times. The sprint and middle we gauged well, but underestimated some of the older courses in long (I guess we biked too slow for these pro athletes!)

The biggest problem we had was making the courses simple enough! The areas we were using for days 1 and 2 were incredibly technical. In some places so many tracks we couldn't map them all at the scale we were using, so instead adopted a 'many un-mapable tracks' symbol. Many of the junior courses were the easiest we could make them in the terrain, and still they were a little on the technical side. Normally course planners work to make courses challenging. We had no such problems. The elite courses we could take anywhere. But for everyone else, a lot more thought was required to cater not only the fastest, but also the slowest and beginners. We weren't far wrong as even my mother successfully negotiated the open short course and didn't finish last!

In the races, the key was to bike steady and navigate hard. Many people didn't pick up on this and made some sizeable mistakes! But after the first day we were both happy with the comments about the terrain and courses. Most notably 'the most physical and technical sprint ever'!

The final week, O-Ringen week was tough. We spent 3 days before re-checking and re-tagging control sites as some kindly members of the public/army had removed our tags. For which we are grateful ... 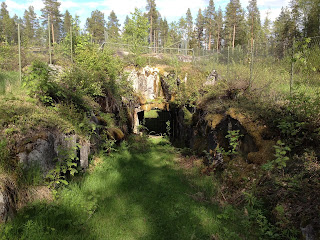 O-Ringen days dawned and we were up early to glorious sun at ... 4.a.m. Too early for me and way to soon for breakfast so it was out biking the 20mins to the event and putting out the SI units on the stakes we put out the day before. Then some biking around checking the units continued to work throughout the competition before collecting in some 6 hours later. We then had to transport our stakes to the next days' terrain and put those out, before being allowed to chill at 5pm. The next morning was the same procedure, Si units out, ride around, collect in. Day 2 was the longest day 4am - 11pm as the chasing start procedure needed to be checked and re-checked to iron out the bugs and allow the start team to practise.

Day three was in 'mygg festivalen' on Pagla. A wonderful ski stadium with a fab view of the start, spectator loop, second spectator control and finish loop. By this point I was fed up of being 'mygged' on Pagla Berget, so refused to leave the commentary house all day!


Being involved in O-Ringen was really a fantastic experience (I'm writing this a week later and still tired from the lack of sleep). It took two people 3 weeks to map the terrains, plus many many more hours of planning and considerations. HJ was sending emails to our boss most days. The organisation of the event was very professional. 99.9% of glitches were foreseen and avoided, thanks in part to HJ and my experience of major events as athletes, but also thanks to our boss whose outside perspective allowed him to see the bigger picture and things we hadn't really given much thought too. It goes to show the importance for having a separate organiser and mapper/planner. Often the mapper/planner gets too involved in the nitty gritty of the courses and forgets about start procedure, finish lanes etc.

We had a really professional start team who worked hard putting up the start each day and ensuring it was of a professional standard - perhaps a lesson for future organisers, a few bits of tape stuck to the ground won't cut it anymore!

Furthermore, the help of the local cycling club, Savast CK, was superb. They helped us to put out controls each days. We divided each terrain into 5 sections of 15 controls, and each person was responsible for one area. My area was 'area 5', so each day I had to hang controls and SI units, and collect, before putting them out in the following days terrain. I was responsible for 'my' units, 86-99. Savast CK helped us by taking areas 2, 3, and 4. They were up at the crack of dawn with dawn and didn't go home until everything was ready for the next day. They even biked all day checking controls, one day putting in 70km (with a few coffee stops on the way). Their assistance and professionalism was key to ensuring the event ran smoothly. (They even spent a couple of months checking their control areas and re-tagging sites so come race day they knew exactly where their controls would be!).