A friend and I had planned to head out on our mountain bikes today for several hours, generally playing around, doing some jumps, skids and drops and such like. Woke up this morning at 9am, looked out the window to find 7cm of snow. 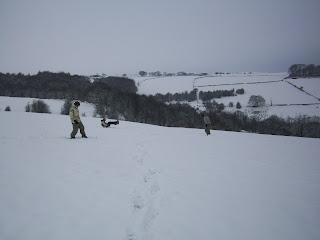 Arrived at the slope, and got ready. 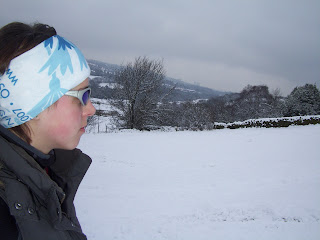 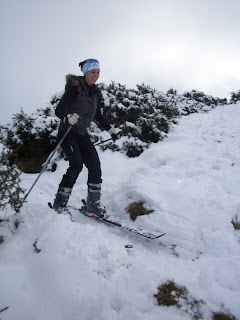 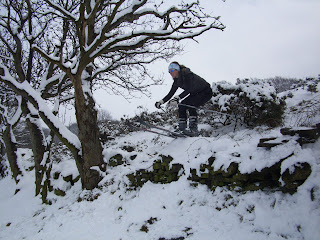 Did some more skiing, before heading to the pub for a beverage and lunch.

Apologies about the old school picture :-) please don't let it come back to haunt me!
British MTBO League - Round 1
13th Feb 2010, Cannock Chase, West Midlands
It was 5am. Stood at the train station waiting for my train to Cannock, I was eager to get there to race. With no expectations of results, there was no pressure, but I still wanted to perform. My selection depended on it.
The date was 3 years ago, and the race was my first MTBO event. My bike: a Giant Boulder with a rusty chain, and a plastic clip on map board. My cycling kit: an Orienteering top and some old shorts. 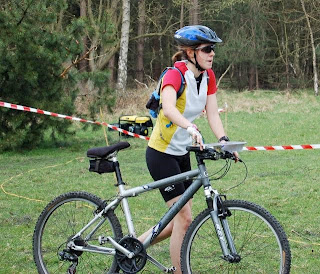 Check out the broken saddle, chain guard, and rusted suspension!
After making many mistakes, not really understanding the rules of ‘no cutting across’ through the forest, I finished 5th, behind Helen Winskill, Jenny Peel and Janine Inman. They were the Gods of MTBO in my eyes. People of whom I had no place in beating, they had been to WOC and had been doing the sport for a number of years. Who was I, an Orienteer who had overtrained and fancied something different, but still finished 15 minutes behind the leader. That 5th place was such a motivator as I then emailed the MTBO selectors and ended up racing in the Europeans a few months later.
Fast forward a year to 2008, and I was 2nd to my long rivalled competitor Tony BB. A year on, and I had won, beating Tony by 5 minutes. Of course, when I started the sport all the top women moved on to other things, leaving a considerably smaller group. Or maybe they were just scared of being beaten!
This year, I have only been back in full training for 5 weeks, so although I wasn’t expecting to win, I did expect to have a good race and be fairly accurate with my navigation. But because it was the first race of the season, and perhaps the third time i’ve done any form of MTBO’ing since August, I knew that the potential for mistakes was greater due to ‘rusty’ techniques. I was, however, very motivated and couldn’t sleep the night before as I was too excited!!
From the start I was having a good race. I had caught one of the men on the A course, which followed the same route as mine for the first several controls, so it gave me more motivation to dig deep in the early stages to keep pace with Bryan. Aside from a small error at a multi-tracked junction, I was pleased with the opening 30 minutes of the course. After this, I started losing a few seconds on each leg when the faster riding kicked in and Stuart Clayton (M18) was able to pull back a few minutes of time. At least I could ride up the hills the men couldn’t, ‘eh Petal’! 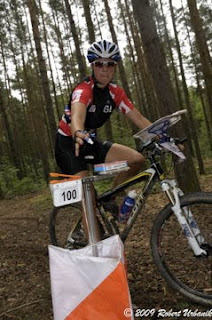 Standing punch at the final control of the Pilsen 5-days in 2009.
Once the technical navigation returned at 2/3rds of the way round, I was able to pick my split time up again. All-in-all, a total time loss of 50seconds which is compromised solely from small hesitations to check I had the correct junction before riding off in the wrong direction.
I finished in 1st in a time of 79.24 whilst Stuart Clayton finished 2nd in his debut event in a  time of 91.35 and Tony BB in 3rd - 91.49. In 4th, and 2nd woman was Angela BB in 101.00 and 3rd woman was Jene Hoare in a time of 103.34.
Full results and maps can be found at http://www.walton-chasers.co.uk/results/2010/febmbo/febmbo2010.htm

This week, the year 3 physio's at Sheffield Hallam started our final placement of the course. It is 6 weeks long taking us up to the 26th March.

I am based in Chesterfield, but it takes an hour to commute in from Sheffield. With getting home at 6.30pm, I am riding my bike in for 3 days a week. Training in the dark for 2 hours a night and not finishing until 9pm just doesn't appeal!

So, my first week. It has been a mixture of a steep learning curve, adjusting to new settings and paperwork, and some positives. I have enjoyed it. At the end of the first week, I am feeling increasingly confident and more independent with my physiotherapy. The last 2 days I have pretty much been running the ward by myself, so this is a totally new experience. With Neurosurgery being complex with unstable patients, I was hardly left alone. This time, I have been managing my own caseload. Exciting stuff!!!

Today is the sort of day where the lyrics from U2's It's a Beautiful Day spring to mind.

I thought I'd reccy my cycling route to Chesterfield today as I'm heading there on placement for the next six weeks. It makes sense that I don't turn up late on my first day because I underestimated the time it would take me!

I headed out with a friend, and with the sun shining, we rode up Eccy Road before cutting across through Dore to the top of Totley and up to Owler Bar. Typically, I will feel pleasantly uncomfortable riding up from Hunters Bar, but today, I felt great. Had my good legs on :-)

At Owler Bar, a quick glance behind showed the imminent show shower/storm, which caught us about 30 seconds later. The descent down the back roads to Barlow and beyond was painful on the eyes, but ironically, once at the bottom, the sun was shining again.

On we went to Chesterfield, eyeballed the hospital and turned around into a light show shower. Sun came back out for most of our climb back to Owler Bar, but with 10 minutes to the top, the snow was back with more ferocity than ever. Amazing views from the top over Sheffield once the sun was back out!

The weather was something like: sun, snow, sun, snow, sun, snow, and then finishing in the sun. Which pretty much topped off my day, making it considerably better than the last few. Got a new brand of contact lenses which is like have the finest silk in my eyes. A-maz-ing! Where have they been for the last year? How did I ever put up with dry scratchy lenses and a total wear time of 5 hours a day?

Hopefully tomorrow, will be a good day too :-)