Back in the UK - temporarily

September, October and early November were hectic to say the least. Each week a different hotel room and rarely in Falun with the comfort of my own clothes and bikes!

After Val Senales, we returned to Norway for a night before I jetted back to the UK. We went skiing on Lygna to test out the effects of high altitude. I was surprised to find skiing relatively easy for once and enjoyed the I-don't-think-I'm-going-to-pass-out feeling! The snow had been there for a few days so it was icy and didn't give under the ski's. We hedged our bets and headed off up the hill hoping the trails on the top were ok. Sadly it was not to be and just after reaching the top of the hill, the solid pisted track stopped. So back down the icy hill all the way with a big snowplough. :-)

We hoped the trails on the other side of Lygna might be better so disappeared over there. The best we found were some 'ski-o' type tracks and a nice skate across a marsh with beautifully soft snow. Back to the ice and I mostly managed to stay upright!

But the next morning I had to fly back to the UK early, so it was bye-bye snow and hello rain! My road bike had been fixed and was ready to ride once the rain stopped.

As it has turned out, the rain has only stopped briefly so with the lurgi going round my family, in a bid not to catch it, I've been avoiding too much outside training. Most of my training has been gym based (I miss it as I haven;t had any chance since May to do weight training), and geared towards the beginning of the ski-o season - triceps and lat work alongside shoulder and arm work. Balance exercises and avoiding running on my ankle. The goal this winter is to not finish last in a ski-o race. Depending on how that goal works out, mp's and dsq's may start counting the further winter progresses. I also have to choose races that have no contours since downhills are scary and I fall over too much on them. Plus, uphills are hard given my lack of upper body strength, and little penguin steps up are apparently uncool. 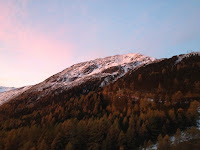 Living with a Norwegian and leading the life of a well travelled 'gypsy'! It's hard work, we're rarely in the same place for more than a week, but for the last three weeks we have made our 'home' in Val Senales, Italy.

The Norwegian Ski-O team were here for their annual high altitude training camp, consisting of one daily 2.5 hour XC ski session on the glacier at 3000m, and a second rollerski/run/strength session in the afternoon. With training twice a day for 4+ hours, they eat a lot. So I was invited along as a cook, cooking food twice a day. 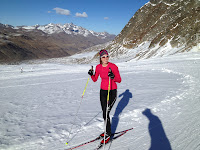 Last year it was a challenge with 4 'hobs' and an oven trying to cook enough for 6 people. This year it was even harder with 4 'hobs' between two apartments and no ovens or microwaves, and a miniscule amount of space. I totalled many training hours cooking two meals over two apartments and legging it between the two to make sure the sausages/pasta/rice wasn't burning. Sadly the rice always burnt but after three weeks it's at least cooking thoroughly :-) practice makes perfect! 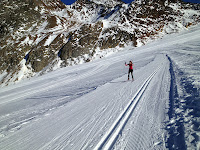 I've been training once a day at altitude which as a MTB'er with 3 weeks of XC experience is a challenge. Trying to work on technique, corners and balance without falling is hard enough for me at sea level, let alone at 3000m. But after much practice and about 90 mins per day, I'm finally getting somewhere. Corners are a little easier (although still snowploughing the scary ones) and I can balance for longer on one ski. 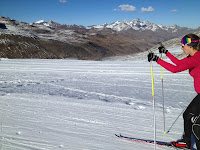 I did a few runs, but mostly it aggravated my ankle injury for several days. The worst was my run down from the top, 3212m via a semi-complete klettersteig and glacier run! I was expecting to make it down in 75 mins, but the climb along a ridge had been pulled up (map incorrect!) so I had to back track and then improvise on a rocky, slightly loose, descent back to the path. From there I ran around the glacier and down to the hut at 2800m. Then the hard work started with an 800m descent in about 2 km with traversed and descended the side of the mountain. Part of the path was small 'deer' path while the remainer over the steep sections was stone steps and scree. 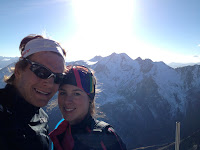 Needless to say that run was a painful one both for my poor ankle which protested considerably from the word go, and for my poor legs which wanted to give way and curl up by the end. The next day was one of pain thanks to the delights of DOMS which lasted 5 days. 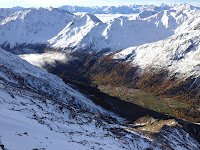 We've had a number of snowstorms one of which put us in the hotel for a day and the second saw us struggle to drive back up the valley after pizza. We arrived in late summer and will leave in the morning in the middle of winter.